The contract to design and build the N3 Butlersbridge to Belturbet Road Improvement Scheme has been awarded to Ferrovial Agroman Ireland Ltd and PT McWilliams Joint Venture. 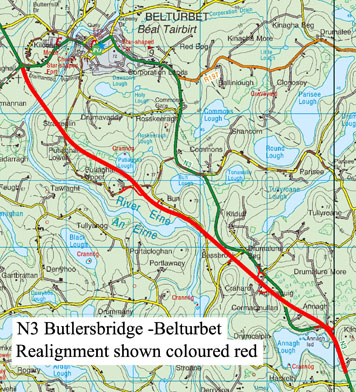 The Scheme comprises the construction of approximately 6.7 kilometres of standard single carriageway and includes a bypass of Belturbet town. The mainline is generally 7.3m wide with 2.5m wide hard shoulders and 3m wide verges on each side.

The Scheme passes in close proximity to Aghnaguig bog which is designated as a Special Area of Conservation.

The project also includes the provision of two significant bridge structures, the River Erne Bridge and the Aghnaguig Bog Bridge:
The River Erne Bridge will consist of a three span cable stayed extrados type bridge. On completion it will be the first of its kind in Ireland and the UK. The proposed bridge is approximately 141m long consisting of a central span of 69 metres across the River Erne and two side spans of 36 metres each.

The Aghnaguig Bog Bridge will be a three span bridge of minimum length 210 metres with the central span being 110 metres. The bridge shall mitigate the impact of the proposed scheme on the protected wetland of Aghnaguig Bog.

In addition to the above the project also includes the realignment of adjoining Regional and Local Roads, earthworks, drainage, diversion of services, surfacing, road markings, landscaping, and accommodation works for affected landowners.

The scheme is due to completed in early 2014.

Thank you for contacting Cavan County Council, we will review and deal with your query and contact you if we require further information.
Back to top